“Mamma Mia”! This could be an exclamation uttered as someone faces the “Tuscany-on-the-sea” like landscape of Skiathos for the first time, with tits pine-fringed, sandy turquoise beaches. Or it could be a loud reminder of the box office hit version of the famous musical, part of which was filmed on its grounds, which in his turn pumped up the popularity of the westernmost island in the Sporades complex worldwide.

Not that Skiathos needed this; the busiest of the Sporades islands, the closest one to the Pelion peninsula (actually, with a scenery that reflects this, it is the extension of the wooded Mount Pelion), with a bit of Mykonos attitude, Skiathos had started building its cosmopolitan reputation 25-30 years ago, promising sun, sea, and late-night revelry.

Of course it is true that the movie adaptation of the West End stage has created a sort of mass-hysteria and hunger for holidays on the islands depicted in the film, and helped Skiathans hang and still proudly display many photos of Pierce Brosnan, Colin Firth and Meryl Streep on the walls of bars and restaurants, and for Skiathos to add celebrities such as, rumour has it, Kurt Russell or Goldie Hawn to its jet-setter list of regulars, though it is also true that long ago Beatles tried to buy one of the neighbouring islands. Should that have happened it goes without saying that there would be a song dedicated to the island, at least about Strofiliá, the precious, protected wetland in midst of the the pine forest, or about the mesmerizing beaches.

For Skiathos is really blessed when it comes to that. More than 60 “siren’s call beaches” on a tiny island of just 42 sq. km, is surely not something you come across very often, even on a Greek island. The most famous include Koukounaries beach, repeatedly ranked in the Top 3 of Mediterranean beach count and of course Lalaria: on the northeastern part of the island, reachable only by bateau, is the kind a beach hard to find even in Greece. Small round pebbles, crystal clear and the “hollow rock” are more than enough to make any beach lover’s dream come true. Don’t even dream, however, of removing any white pebble (which is what lalaria means in Greek) as a souvenir, ’cause it will cost you a hefty fine. 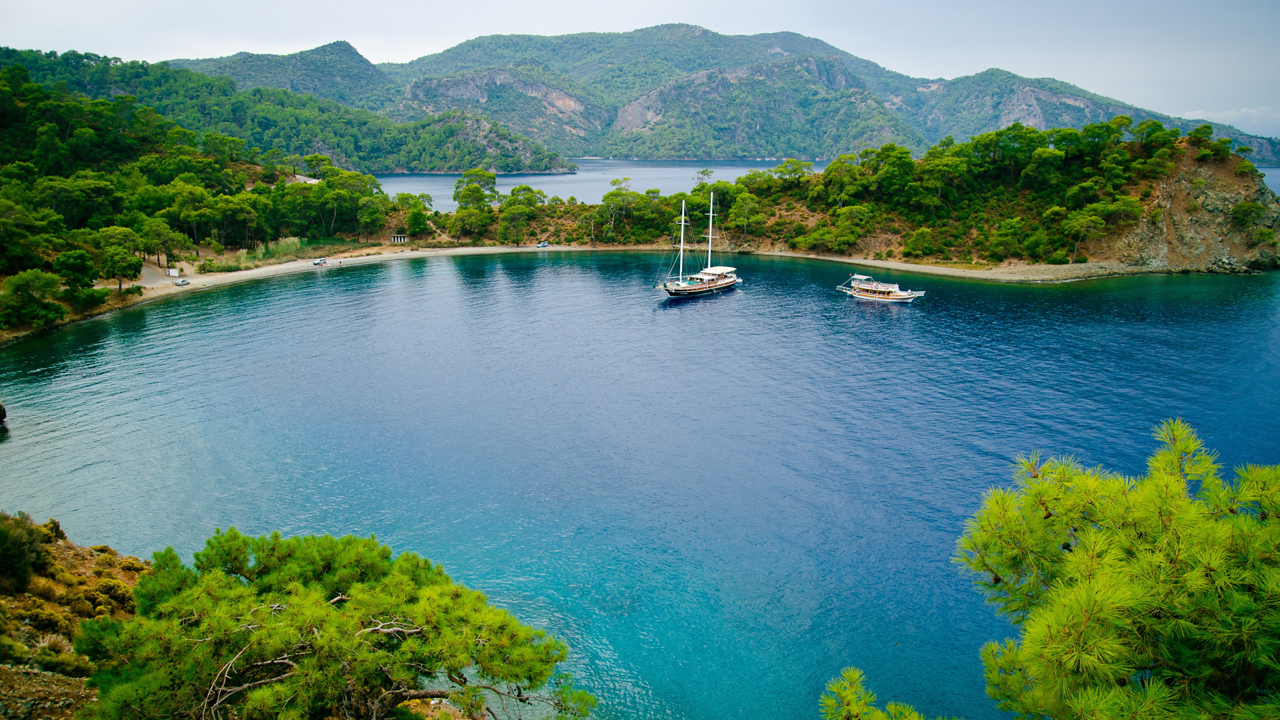 Maybe you have seen written that "most people come to Skiathos for the beaches and the nightlife – if you have come for anything else you may want to depart quickly" but this is only the one side of the coin, because nature lovers will be thrilled by the long walking routes and trails, all passing through the unspoiled parts of the island. Thanks to hefty protection measures, Skiathos it is one of the least built-up islands since construction is prohibited in the forests, which make up a huge part of the landscape, while on the other hand, history buffs can wander through the capital town, the boardwalk by the Old Harbour (ultimate nightlife hotspot) and the stout walls and buttresses of the Venetian fortress Bourtzi, the latter being one of the most amorous spots on Skiathos thanks to the pines and the view and vice versa.

The town’s turning point, of course, is its natural harbor, nowadays a yacht and sailing boat haven that adds a cosmopolitan flair, which, more or less, had figured the town’s fate for centuries. In historical terms it seems rather futile to try to establish who first discovered Skiathos, but in summary, certain historic discourses speak to pre-Hellenic Ionian origins, with about 4,000 years of human presence. What becomes a turning-point in constructions of European national belonging though, is the sucking of Constantinople by the crusaders (1204) as the island, along with the neighboring Skopelos, comes under the rule of the Venetian brothers Andrea and Ieremia Ghisi (1207), the founders of Bourtzi and the Castelo of St. George that today embellishes the port of Chora. And although this period is equally turbulent, it introduced a Western presence in local histories that modern Skiathans use today as a sort of European leverage against the Ottoman past and the invasions of the Saracen pirate Barbarossa in the 16th century.

In the context of the Greek Revolution but also the WWII, Skiathos figures as recipient of refugees and therefore as having played a global protecting role throughout the ages. Not to forget that Evangelistria, the holy monastery of the Annunciation (one of the most remarkable monuments of the northern Sporades) was both a centre of regional Christianity and the birthplace of the first Greek flag (1807), on which the “Armatoloi” (militia) fighting for their independence took the sacred oath of self-sacrifice for the nation-to-be.

But it would be equally futile also for someone to try to mitigate the Hollywodization, the amusing, enchanting and capricious character of the island simply because Skiathos is the island of entertainment; everything is made to satisfy the most sybaritic soul; for the pleasure and the enjoyment of its guests. The proud motherland of literati such as Alexandros Papadiamantis and Alexandros Moraitidis is lively, picturesque and fun for all ages. And, yes, no one can deny this; Skiathos is a very touristic island, surely overcrowded during the highest summer peak.

This is the price to pay for its fame and it couldn’t have been otherwise for a vacation spot that it’s easy to come to, but hard to leave from. Besides, Abba’s “Mamma Mia” lyrics say it better: “My my, how can I resist you?” 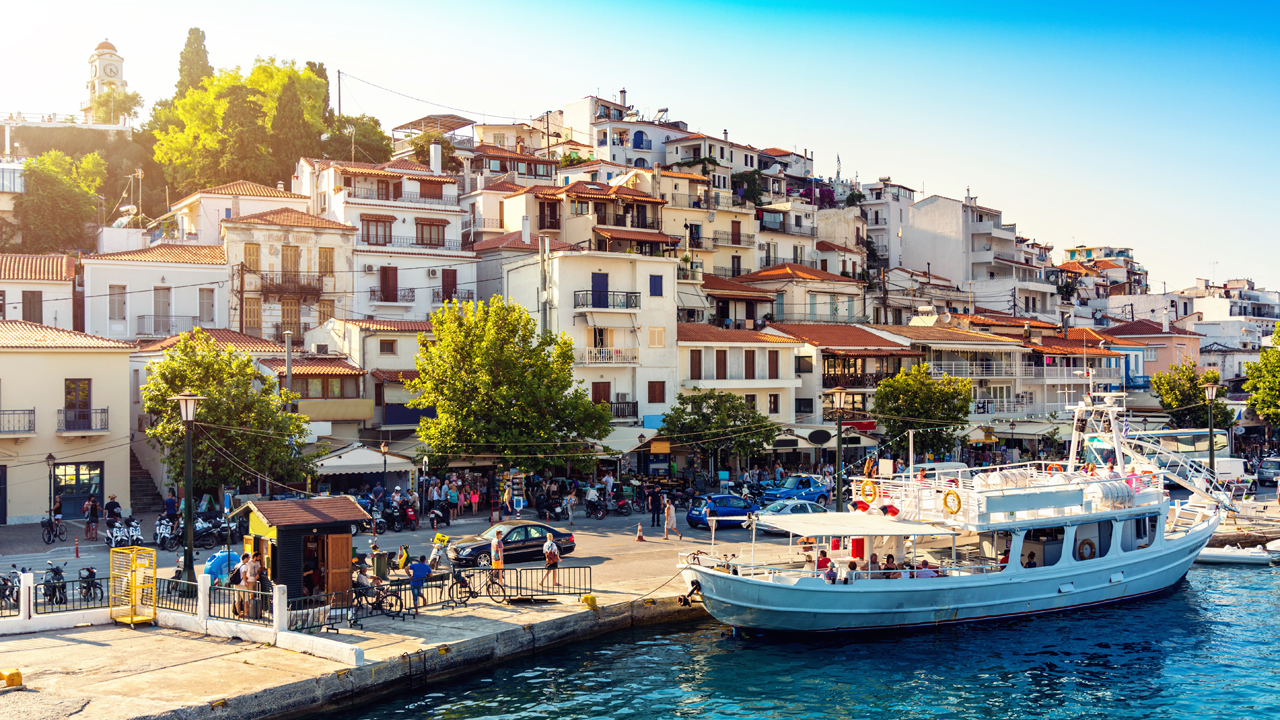